skip to main | skip to sidebar

an experiment with onions, acid formation

another experiment with onions.

When onions are cut, they become pungent very quickly. This is because when the cells of the onions are damaged, sulphur containing compounds are acted upon by enzymes (chemical agents) which turn rather innocuous substances into the pungent onion smell we all know. These pungent smells get into the air and eventually some can get into ours eyes, with the well known effect. These substances are acids, and can produce a bitter taste; in many modern recipes, the author usually suggests adding sugar to a dish, to counter this bitterness. If, however, the onions are fried quickly after being cut, the pungent chemicals are not produced in the same quantity, and can be driven off by the heat.
My experiment was to determine how quickly these pungent chemicals were produced. I decided the preliminary experiment should monitor pH and conductivity of the diced onion in pure water, over time. The pH would give an indication of the acidity being produced, and the conductivity would indicate the presence of the acids produced by the onion.

I cut up half a medium sized onion (25g) into 3mm dice and immediately placed them in a beaker which contained 50ml deionised water. A pH probe and conductivity probe were immersed in the liquid, and monitored every two minutes.
The results showed that conductivity increased rapidly for the first 3 minutes, then became relatively constant after 10 minutes, and for the next 20 minutes (which was monitored). The pH was the same, decreasing in the same way.
This experiment showed that the reactions taking place started very quickly, and by 2 minutes were 50% complete. At the end of 15 minutes, I analysed the onion water using a technique called ion chromatography, which separated the acid ions into separate entities. 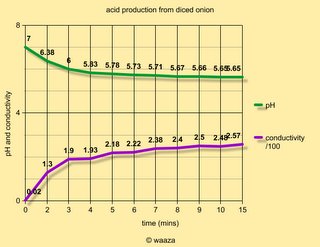 The graph shows pH and conductivity against time, though the conductivity values shown have been divided by 100 to get them on scale.

What does all this mean for the cook?
I think it means that if we want to cook chopped onions, then one has to put them in hot oil as quickly as possible, if we boil them we should expect bitterness. I believe 3mm dice is about right for dishes which need the onions to be cooked in oil until golden, and would strongly argue against grating onions, which would 'damage' the onion cells too much, producing even more acid.
Posted by waaza at 10:58 am