skip to main | skip to sidebar

an experiment with frying onions

Some of you might know I'm a practicing scientist, but I apply my science to food related topics too. I ran an experiment recently, the results of which you may find interesting.

I wanted to see how water is driven off from frying onions, and how much water is left in the oil after frying.
I cut a medium sized ordinary onion (120g) into 3mm dice, and threw it into 100g of hot (120°C) rape seed oil contained in a beaker which was placed on a hotplate (halogen type) which was arbitrarily set so that the onion cooked without browning. Into the oil was placed a thermocouple to monitor the temperature, and I had a balance (scales) to determine weight loss.
I ran the experiment for a total of 70 minutes, noting temperature of the oil and the total weight of the beaker, with contents, every two minutes.


I thought the results were interesting. The temperature settled to 100°C very quickly, as expected, this because it cannot rise above this temperature when free water is present. This situation lasted for about 20 minutes, the temperature fluctuating a few degrees in this time. From then on, the temperature began to rise, a little at first, and increasingly as time passed, until, at the termination of the experiment, it was 141°C. The loss of weight (mass of water) was remarkably constant, at 1.63g/min (2 x sd =0.67), for the first 60 mins, when the rate slowed (as most of the water had been driven off). 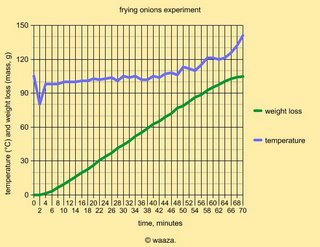 The results showed me that for a given temperature of oil, the rate of water loss was constant. Total amount of water loss equated to 87.2% which I think agrees well with literature values (I need to check). The onions did not brown for the first hour, except for a few bits which were above the oil level (nearly all the diced onion was covered with oil, not something we would normally do when cooking golden onions).I determined the water content of the oil at the end of the experiment, and was amazed to find it was only 0.017%.This suggests that onions can be fried so that all the water is boiled off and only oil remains; this could be critical if the next step in the recipe was adding woody aromatic spices (cardamom, cassia, cloves, mace) when the flavour compounds will be extracted. If water were present, less extraction would take place, I think.

Next experiments in this series are to do the same with garlic, ginger and chilli, and to check on the extraction efficiency of the chilli colour.
Posted by waaza at 10:54 am